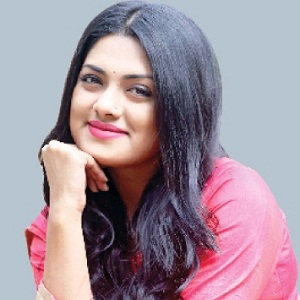 Popular Bangladeshi actress Nusrat Imrose Tisha’s career was started with the television drama Shat Prohorer Kabbo which was directed by Ahsan Habib and written by Anonto Heera. Unlike many other Bangladeshi models and actresses she is a professional actress. Though her career was started in 1995 but people were familiar with her face through Notun Kuri competition, which was state owned television Bangladesh Television’s  (BTV) cultural competition for children.

Nutun Kuri had huge impact among children; it had many competitions including dancing, singing, drawing, acting and reciting poems. This cultural program produced many famous personalities of Bangladesh including Tarana Halim, Rumana Rashid Ishita, Tarin Ahmed, Meher Afroz Shaon and Sabrin Saka Meem. Nusrat Imrose Tisha was one of them, she became champion in 1995. So we may know her as an actress but she also knows dancing and singing well. Actually she started singing at the age of five.

Tisha’s acting in single episode TV dramas and TV serials were going in parallel with modeling. In the year 2009 she was debuted in silver screen. Her debut film “Third Person Singular Number” was a success, she won Meril Prothom alo award in best film actress award (Critics) category. She was also appreciated worldwide for another film “Television”.

In many cases Mostofa Sarwar Farooki was her director and they married in 2010.

This write-up was first appeared on bd-personalities.blogspot.com (2016)